What if... I could untat a ring without opening it? It sounds like a "hack" video title on "yee olde tube".

Before I start complaining about the ridiculous use of the word hack nowadays, let me give you some context.

I have been making small fish and sea animals to sew onto a tiny curtain. Working on a small item, I didn't load much thread on my shuttles.

I closed a ring and noticed a mistake right afterwards. Just like looking before crossing a street, we should also look before closing a ring, but I forgot.

So I pondered for a moment. What if? And indeed, I did it. Noticing I had only a little thread left on my shuttle, I unwound it and untatted it from the last stitch up to my mistake. I then wound my shuttle again, ready to get back to work.

Such a simple solution! I of course felt so proud, I stopped to take pictures of it. As if I was supposed to prove to someone that I had done it. Here they are (in case you did not believe me):

You might recognise Jane Eborall's starfish. She has lots of cute animal patterns.

I was quite beyond myself with joy at discovering this fancy new trick. And you might say "But this is not a new trick. I have been doing it for years." Well, it's new for me, so I was happy for discovering it.

So happy in fact, that after getting photographic evidence and boasting to my husband (who just said "that's nice, dear"), I happily retat the rest of my ring.

... Only to notice after closing it (forgot to look before closing again) that I had made another mistake in the same ring. Good thing I had just discovered that neat trick, huh?

And just to prove to myself that practice makes perfect, I managed to make another mistake on a ring shortly after that!

I guess I learned how to untat a ring without opening it, but what about learning to look before closing a ring?

PS. As a bonus, chains can also benefit from a short thread on the shuttle. I find the spot from where I want to untat, unwind the shuttle, then pick at the core thread and pull it out of the stitches.

Look at the size of those shuttles!

The women that came before me were and are quite skilled and crafty. Some of them knitted, croched, sew, did Romanian point lace, spun yarn and wove rugs and towels.

My mother claims she isn't too crafty, but she has done some tailoring and taught me how to sew by hand. I owe to her a good number of handy stitches, which saved my clothes on many occasions!

The only other one in my family I was able to see at work was my grandmother from my father's side. She did so many things: she spun wool, knit, sew and wove. I still remember her spindles, plain wood with two stripes, one green and one pink. She let me play with them. She also had a big weaving loom that took up an entire room! And she definitely had a few wooden shuttles, of course much larger than mine. Most of these are lost now sadly, after her death.

But let me get to the story about the big shuttles!

Last year we went on a small holiday to the mountains and visited an interesting place, the fortified church in Harman, here in Romania. It is a very well kept church, withe a dizyingly high tower and surrounded by a large wall that also held rooms inside. It is now open to the public as a museum. 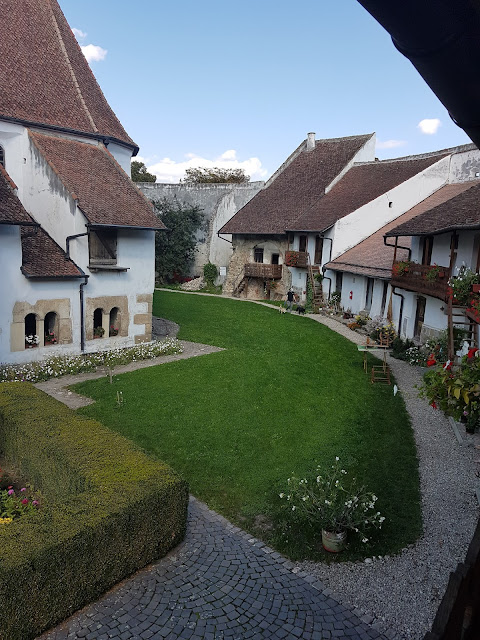 Inside the rooms in the outer walls, they arranged the items still remaining from those times. The furniture, tools and daily items, some whose purpose I pondered over.

In the garden, they had a display of tools for working yarn. There was a spinning wheel in the back and in the crate there were some very interesting wooden items. 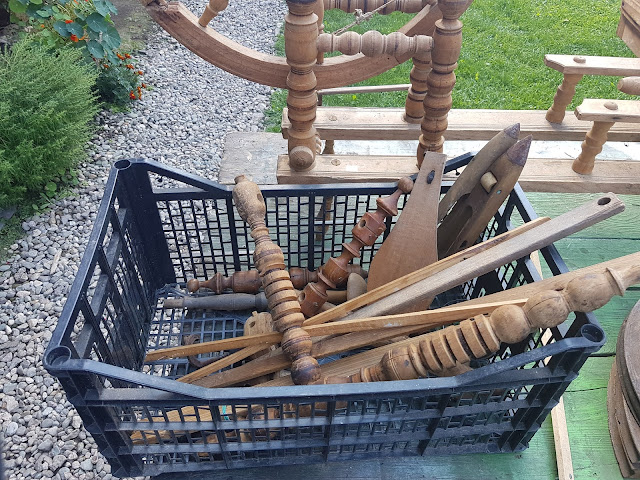 My imagination ran wild with me for a moment, thinking I was looking at spindles and various yarn tools, but the rounded pieces are just spinning wheel legs. The guitar shaped thing in the back made me think of a rug punching tool, but it is not split in two halves...

And last but not least, look at the size of those shuttles! Or is it still just my wishful thinking that the tapered items are shuttles? If anyone can recognise these things and set things straight, I would be quite grateful.

Back to the old ways

Oof, it seems that lately I have been re-doing rather than doing and very few things are actually turning out well.

I have been making piles of botched and cut off tatting every evening, not really happy with the results, afraid of having too many ends to hide and just throwing away good thread... I need to snap out of it!

I guess after a longer pause, things don't come as easily and good old tricks are forgotten.

For example, I did remember that the best way of working an even ring would be to always clasp the knots tightly before pulling on the thread to enlarge it, so they don't bunch up against each other. The tension shouldn't be too tight or too lose, but consistent. Although I have been making tighter knots for the coasters (I don't like flabby coasters). And I had completely forgotten a good trick to closing a ring: bringing the two ends close together and holding the knots between my fingers as tightly as possible, so none of them shift away from the rest.

Another idea I was trying to forget (but was forced to remember) is that my preferred method of hiding ends is to sew them into the knot caps. There is less bulk for the chain or ring and it seems to come undone less easily. I was never afraid of hiding ends before and I'm slowly getting back to that "bravery". I have things I made that I put through the washing machine or even scrubbed with a brush to clean and no ends came out. One thing to avoid here... hiding two ends under the same section.

I'm also unhappy with the split chain, no matter how much I brag about learning it. I can't seem to be able to control the tension on the no knot part. Either that, or I don't get the length of the chain right. So I'll put my tail between my legs and grab that needle and whip stitch those thread ends, as I used to.

Here is another coaster I made that I am finally happy with. The pattern is part of the Veronica doily, by Tatting lace, Marmelo.

Take care everyone and don't forget your tried and true methods!

Adventures in Coaster Land. The split chain that was not split

And now, the conclusion:

I was making another coaster and ran out of thread... again (I tell you, this thread is so thick, I can barely fit 2 meters on a shuttle). But I ended up with just one shuttle and I had one more chain to make. 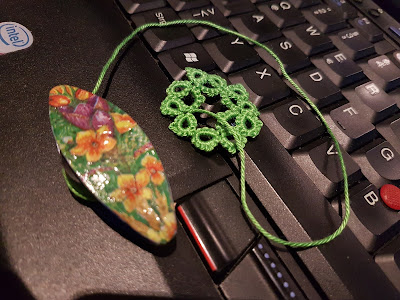 Not too thrilled about hiding 3 ends in one section, I started wishing that there could be a way to make a chain with just one shuttle... a single shuttle chain... And then it hit me.

I could just make a split chain, but only the second part, with just one shuttle. So I do my best to measure the core thread and made the split (but not split) chain. 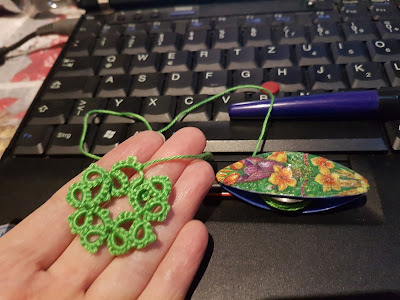 It looks almost ok. Not as tight as my usual chains with this thread (I'm not big on flabby coasters) and 1 mm or 2 longer than the other chains, but I feel quite happy with it. Not bad for a split chain newbie :) 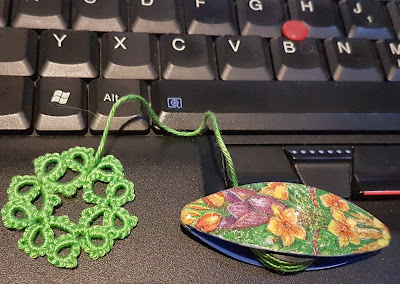 And, as a bonus, the thread was nice enough to allow me to open up two closed rings. Not all threads have been this helpful! 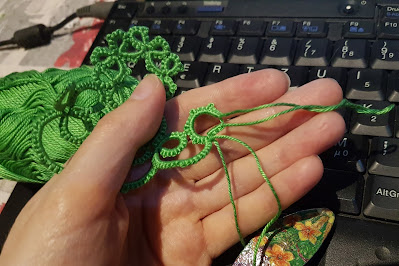 Now on to more coasters and the tatting adventures they bring!

The shuttles are back! Winter was a time of crochet, but along came February and the little voice in my head said "time to make trinkets!"

If I'm confusing you, on the 1st of March we Romanians give trinkets (brooches, pendants or bracelets) to the important women in our life. And I have been giving mine tatted trinkets for several years now, with varying degrees of success. Meaning I sometimes missed my deadline...

So this year I started early and I'm still not done, even if it is almost the end of March. I have trinkets enough for next year too! I'm also remaking a necklace I had given to my godmother and I also have an order for tatted coasters.

Who does the thread think it is?! I am its master, I tat it and untat itin any way I see fit! Heh! But, joke aside, this thread and I have been through a lot. It is in fact the thread with which I learned how to needle tat, long ago.

There is one thing I'm not too comfortable doing with it and that is sewing in ends. With how much it splits and untwists, just threading it would be a nightmare. So I covered the ends in tight, finger-aching tatting.

And what to do at the end of a row, you ask? There is a saying here in Romania, that the lazy man has even more work to do. So, rather than hiding the ends, I go about learning how to make split chains and relearning (yes, shame on me, I know) how to make split rings with 2 shuttles.

I had never made split chains before and chose this video where Frivole didn't have spoken instructions and the annotations got lost when Youtube decided that annotations were no longer cool. But she was saying the method (created by Marie Smith) was the best and easiest way for her to make split chains.

It took me a while to pay proper attention and see where the shuttle was supposed to go the second time, but I learned and now I can climb out of a row like the best of them!

I made two split chains in the coaster below, because I was planning for a third row, but decided to stop at 2, because it was becoming too flowery. And I am making these coasters for one of our guy friends, who specifically asked for any colour other than the pink I had used for my own coaster.

Now, after split chains, who knows what I will learn next!

A bit too busy tatting to write about it too much.

You are also invited to my other blogs:

- Pawprints, ears and a tennis ball - about our doggie, Aschiuta
- The relativity of a corroded mind - some of my poetry and bitesize prose is here

Lavi
Hello! My name is Lavi and i write about my two doggies, Aschiuta and Nightmare, my tatting (a form of lace making) or i just write. Poems, little stories, thoughts. You're welcome to read them and i hope you enjoy them!